Just clarifying a point from earlier: Skerritt says that of the five cases reported this week, they are all in hospital, but that of five hospitalised from earlier adverse events, four are at home, and several have recovered well enough to work.

So all the new people are currently hospitalised and that’s a mixture of both the seriousness of the presentation but also the importance of them being closely monitored.

The really encouraging news is that of the five people hospitalised from earlier adverse events, four of them are now at home and several are at work.

Of the clotting cases, Skerritt said:

A lot of these people did have other serious conditions but there’s not a common thread.

He also notes that it’s obvious these cases are likely to occur in those aged over 50 as they are generally – with few exceptions – the only ones receiving the AstraZeneca vaccine.

He emphasises that the rates detected in Australia are “very similar to those both publicly and confidentially reported to us in places like Canada, UK and continental Europe”.

Dr John Skerritt from the Therapeutic Goods Administration is speaking now about the weekly report. He says four of the five cases reported in the past week as having serious blood clots recovered quickly and are home.

Five blood-clot cases ‘likely’ linked to AstraZeneca in past week

Just circling back on news from earlier relating to cases of blood clots in people who have been vaccinated against Covid-19.

The full report is here and it’s detail heavy, but here’s a particularly interesting snippet:

These take the total Australian reports of probable TTS following the AstraZeneca Covid-19 vaccine to 11. To 2 May there had been approximately 1.4 million doses of the AstraZeneca vaccine administered.

China has suspended one of the channels for economic talks with Australia as the rift between the countries continues to grow.

Beijing had reserved the right to take further actions after the Morrison government last month cancelled Victoria’s two Belt and Road-related agreements with China. Those cooperation agreements were with China’s National Development and Reform Commission

That commission announced today that it had decided to “indefinitely suspend” all activities under the China-Australia Strategic Economic Dialogue, Reuters reports.

The commission said in a statement:

Recently, some Australian commonwealth government officials launched a series of measures to disrupt the normal exchanges and cooperation between China and Australia out of Cold War mindset and ideological discrimination.

Comment on the significance of the step is being sought from the Australian government, which has previously complained that ministers have been unable to secure talks with their Chinese government counterparts since early last year. 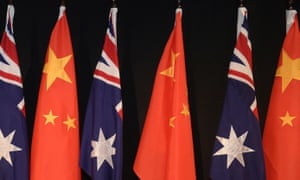 China today suspended one of the channels for economic talks with Australia. Photograph: Pool/Getty Images

Rather than argue that the outbound travel ban is disproportionate, the challenge is narrowly focused on whether health minister Greg Hunt can impose a blanket rule rather than using the Biosecurity Act’s provisions that allow restrictions on individuals, subject to higher safeguards.

Counsel for Libertyworks told the federal court that parliament had made a “deliberate and conscious choice” that “even in the context of a biosecurity emergency … if one wanted to subject someone to a restriction infringing on their rights, those measures could only be done through a human biosecurity control order”. And that is not how the travel ban was enacted.

The hearing hearkened back to simpler times, when the Act passed in 2015 and the biosecurity emergencies everyone was worried about were things like foot and mouth disease but not Covid-19.

At one point, the explanatory memorandum was read including the prediction that the “the human health provisions contained in the bill will also be seldom used”, prompting justice Anna Katzmann to quip drily “ha-ha”. The joke is on all of us, in hindsight.

The solicitor general, Stephen Donaghue, argued that before the health minister can start making blanket determinations the governor-general must first declare a human biosecurity emergency, a “severe and immediate threat” of a “nationally significant scale”.

Donaghue warned if Libertyworks’ interpretation of the law is right, “all sorts of things” can’t be done to a group of people without individual orders, including contact tracing or prescribing people from visiting aged care centres. Protective measures would be “eviscerated”, he said.

[The plaintiff’s construction] destroys the efficacy of emergency powers when it is important to be able to break glass [in case of emergency], to override other laws to respond to the magnitude of the threat.

The hearing continues after lunch.

New Zealand health authorities have just released the following statement relating to the case in NSW:

New Zealand officials are in contact with Australian counterparts following the confirmation of a positive case of Covid-19 in the community in Sydney reported yesterday.

Information about locations of interest visited by the case is available on the New South Wales health website.

Anyone in New Zealand who has been at any of the locations of interest at the specified times should contact Healthline on 0800 358 5453, self-isolate and be tested as soon as possible.

Individuals in Australia who were at a location of interest at the specified times should follow New South Wales health advice regarding isolation and testing, and should not travel to New Zealand. The ministry has requested airlines communicate this message to anyone before flying to New Zealand from New South Wales.

At this stage, our public health assessment is that the risk remains low.

We expect to be able to provide a further update on the situation in Sydney later today.

With that, I shall leave you for the day! Nino Bucci is here to take you through the next few hours of news. (Hopefully they will be more positive than the last few.)

Just in case you were wondering, the two local cases listed in the NSW numbers today include the woman announced today and her husband, who was announced yesterday (after the cut-off for Wednesday’s numbers).

News has just come through of a second blood clotting case with likely links to the AstraZeneca jab, this time in a 70-year-old man from Tasmania.

The health department has just released a statement:

The Tasmanian Department of Health has convened an expert alert advisory panel to review a case of suspected thrombosis with thrombocytopenia syndrome (TTS) following vaccination with the AstraZeneca Covid-19 vaccine.

The patient, a 70-year-old man, reported symptoms seven days after receiving the vaccine. He is currently in hospital receiving treatment and remains in a stable condition…

The TGA has today confirmed that this case (together with four cases from other states) has been assessed as TTS, likely to be linked to the AstraZeneca Covid-19 vaccine.

He said in the statement:

I want to reassure Tasmanians that vaccination remains the best way to protect against severe illness and death from Covid-19 and is a core element of the pandemic response.

TTS is rare, newly described and has been linked to the AstraZeneca vaccine. Australian immunisation experts report that the overall rate of this rare syndrome is about 6 per million people vaccinated.

In people aged 50 years and over, the benefits of AstraZeneca Covid-19 vaccine outweigh the rare risks associated with vaccination. This is due to the lower risk of the syndrome and the increased risk of severe Covid-19 outcomes in those over 50 years of age. People who have received a first dose of AstraZeneca vaccine without serious adverse events can be given a second dose, regardless of age.

Competition tsar Rod Sims has rejected a proposal from Qantas and Japan Airlines to expand their existing code-sharing deal into what they call a “joint business agreement”, saying the hook-up would undermine competition as international travel recovers from the pandemic.

The two airlines had asked the Australian Competition and Consumer Commission for permission to coordinate flights between Australia and Japan for three years, with Qantas telling the watchdog in a submission that the deal was “critical to sustainably restoring air links across a wide range of routes between Australasia and Japan”.

They needed permission because the arrangement would breach competition laws.

On the proposal Sims said”

At this stage we do not consider that Qantas and Japan Airlines’ proposal passes that test.

Protecting competition in the airline industry is critical to ensuring recovery in the tourism sector, once international travel restrictions ease…

Granting this authorisation would seem to eliminate any prospect of Qantas and Japan Airlines competing for passengers travelling between Australia and Japan, as they did before the COVID-19 pandemic. This elimination of competition would benefit the airlines at the expense of consumers.

This is coming up later today, but I’m mostly just sharing because I’m impressed with the framing of the bridge in the background.

After eight long years of the Liberals and Nationals, Australians need a government that’s on their side. pic.twitter.com/DDQqCtwa3g

Well, there is some good news from WA at least! 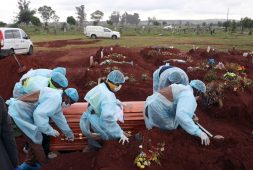